Progress of the Calotriton arnoldi program
at Generalitat de Catalunya

There are sufficient resources to maintain the current centres, but the number of centres should be expanded, and the monitoring of reintroduced populations should be intensified. It is especially important to have centers specialized in the growth of larvae until they reach the optimal size for release (2-3 years). Staff support would be needed to monitor reintroduced populations for the creation of new breeding centres. Support would be needed for some habitat improvement actions or compensation to homeowners who may be affected by their forestry activity.

There are gaps in information in the biology of the species as well as in the characteristics and needs of its habitats. The complex structure and characteristics of torrents with periods of drought, sudden torrential level rises and the existence of groundwater causes data to be lacking to determine the torrents potentially suitable for the species. Intensive mapping and study of potential torrents is underway.

2021: The European LIFE TRITO MONTSENY programme (LIFE15 NAT / ES / 000757) ended in 2020 for actions related to ex-situ conservation and only one prologue has been requested to complete some habitat improvement actions within the range of the species. 2018: Geographically and genetically, two isolated populations are differentiated (eastern and western populations). Two independent breeding programs, are being managed, one for each of the populations. Currently there are 4 centers involved in the Ex-situ conservation program: Torreferrussa is the center of reference, where are the founders of the two populations. Pont de Suert keeps additional animals from the western population and the Zoos of Barcelona and Chester keep additional animals from the eastern population. Currently, there is the help of a Life project of the European community, LIFE TRITO MONTSENY (LIFE15 NAT / ES / 000757) www.lifetritomontseny.eu It has been confirmed that animals from the captive breeding program which have been released to the wild have subsequently bred in the wild. 2016: There is enough genetic evidence to differentiate two different ESUs (Western and Estern Sector). Genetic studies are being performed to define the genetic structure for each sector, depending on these additional founders will be caught. Reproductive evidence for the new populations released into the wild have been found. This program was initiated by the Servei de Biodiversitat, del Departament Agricultura, Ramaderia, Pesca, Alimentacio i Medi Natural (DAAM), Generalitat de Catalunya (Wildlife Service from the Catalan Government). Founder animals included 5 males and 5 females from the Western sector ESU and 6 males and 6 females from the Eastern sector ESU. A phylogenetic study has been carried out on wild populations to describe the species in Carranza and Amat (2005). There is enough genetic evidence to differentiate it from Calotriton asper. Preliminary studies (using Cyt b, ND4 and RAG-1 markers) for the ESUås definition (Valbuena-Ure_a et al., on preparation) suggest two different ESUås. Microsatellite studies are being performed to define the genetic structure of this species. Additional facilities will be required in the future. The recovery Plan is in elaboration process inside the general Management plan of species of fluvial habitats The captive breeding plan have been written by DAAM. We are pending genetic studies to determine ESUås and structure of genetic reserve. The first generation captive-bred animals did lay eggs but they failed to develop completely. We are just doing the first reintroductions in order to increase distribution. 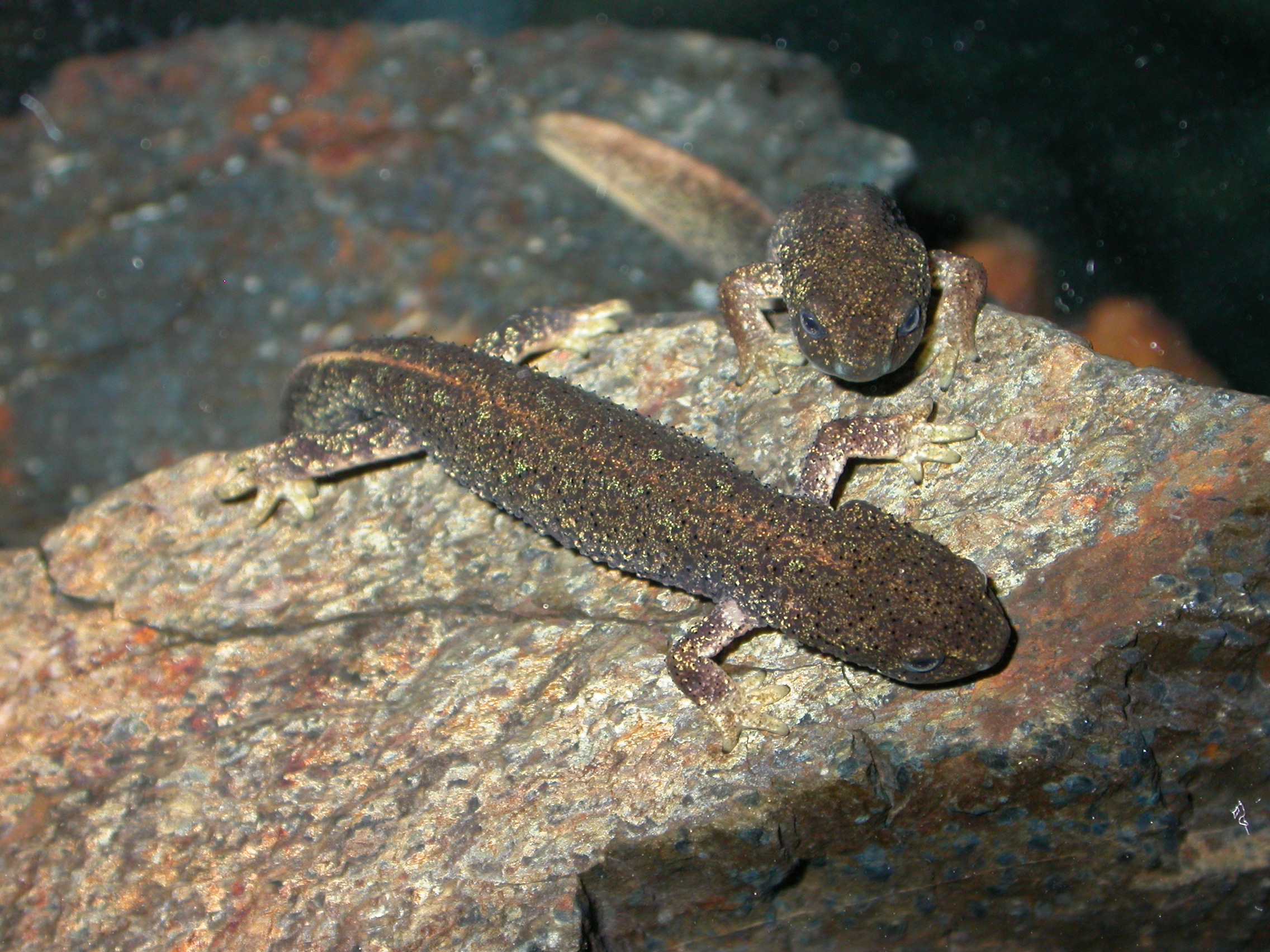